Eucomis plants go dormant with the frost, having emerged from the ground very late in the spring (in late May or early June) by when the threat of frost had passed. Planted deeply in the ground and emerging late they thus avoid any frost damage. The earliest flowering (E. autumnalis) is thought to be the most tender. In tubs or planters they will need more protection in winter, but needing no moisture or light when dormant, they could spend the coldest months in a dry shed. In summer the flowers are topped off by a crown of small tufty leaves, hence the common name for them – the Pineapple Lilies. They last ages in flower, and architectural seedheads follow the flowers till the frost cuts the stems down as dormancy returns. Looking a bit exotic they are much easier to grow than first imagined, only requiring deep planting in a reasonably fertile and moisture retentive soil in the sun to do well. Slugs can be a problem as they emerge from the ground, but they are not palatable to rabbits. And the flower stems last ages in water, just cut off a short amount of stem each week as you change the water and you’ll get 3 or 4 weeks use from them. 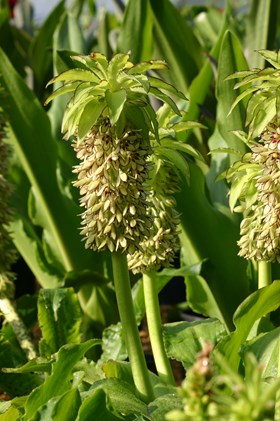 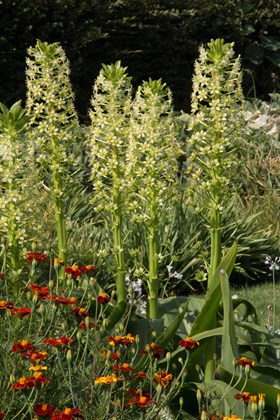